WHAT A BROTHERHOOD MOTORCYCLE CLUB IS (and is not): 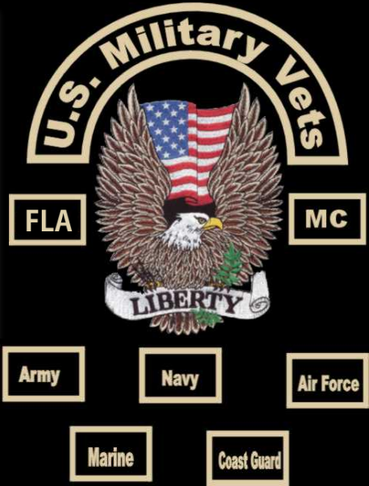 The name U.S. Military Vets M/C and Eagle/U.S. Flag patch are the property of USMV M/C National and will not be used or reproduced without National's permission.
​​© 2016
N.J. Sielchanowicz designs

The name U.S. Military Vets M/C and Eagle/U.S. Flag patch are the property of USMV M/C National and will not be used or reproduced without National's permission.
​​© 2016
N.J. Sielchanowicz designs

Prior to joining a Motorcycle Club (MC) like the USMVMC it is imperative that one understands the philosophy of the traditional MC, how it is organized, and what to expect from membership in one. Each MC has many things in common with other MC's but each is still distinct in its overall philosophy. Even chapters within the same national organization, while subject to the bylaws of that particular club, adopt their own policies and procedures and develop their own collective personalities. This is not surprising given the fiercely independent nature of most motorcycle riders.

If Motorcycle riding is a significant part of your lifestyle it is natural that you would look at organizations that center their existence around motorcycles, riding, and associated activities. There are, however, many types of motorcycle organizations. Being correctly informed can lead you to the correct type and specific group that is right for you. Within the motorcycling community are subcultures that if entered into recklessly, or with the wrong intention, can prove to be detrimental to both the group and the individual.

Regardless of what type of club a rider is affiliated with we are all part of the motorcycle community. Members of the public do not understand the distinction between MC's, Motorcycle Associations (MA's), and Riding Clubs (RC's). Therefore, most organizations tend to expect that their members act to bring favorable credit to the motorcycling community in general. Further, almost all organizations expect of their members a certain level of respect towards all other organizations and their members. The USMVMC is no different.

Riding Clubs (RC's) are one type of group that appeals to those that want to go on rides occasionally with a group but do not want a deep personal commitment to the other members or to the interests or goals of the collective. Pay your dues (or buy the right brand of bike), sign up online, and you're in. Decide that you don't want to be in anymore, or sell that bike, and you go on with your life, and few will miss you. Make a few friends, have a good time, learn a little about riding and your machine, go on some group runs, maybe even have a fundraiser or two. Ride with the group and have a good time. Examples of these are the Gold Wing Road Riders Association, Shadow Riders, or HOG. All good respectable groups that can be a lot of fun and all are part of the motorcycling community, but they differ with a MC in many ways. RC's can be a good place for those "weekend warriors" that don't want to adopt motorcycling or others who ride them as a pervasive part of their lifestyle.

Motorcycle Clubs are the pinnacle of the motorcycle community. They command respect for several reasons. While anyone can thuggishly demand respect only a true MC can command it through the consistently mature and professional conduct of each of its members. Members are chosen by the organization, and while many may be invited to take a look, only a few will be asked to join. Members of traditional MC's must demonstrate a level of personal commitment and self-discipline uncommon in today's society. Motorcycle Clubs relate to other clubs through mutual respect and protocols. They are proud of their brotherhood, their colors and their club. Recognizing that an entire club can be stigmatized by the inappropriate acts of a single individual flying their colors, new members generally go through a probationary period where they learn the protocols and expectations of the Motorcycle Club community before they are awarded the full colors of that Club. Individuals who lack respect for themselves, their brothers in the club, and other members of the MC subculture will not find a place in any true MC. A true MC demands that its members portray to the public a positive image of their club and motorcyclists. To this end, full colors are earned only when a probationary member demonstrates a firm grasp of the behaviors expected of him. A true MC strives to be respected and admired by the community rather than feared. The "golden rule" applies; you have to give respect to get respect.

A disturbing trend is developing in the Motorcycling community. Individuals not prepared to undergo the rigors of joining a three-piece patch club or lacking the experience and expertise to gain acceptance of a new club in a given area are attempting to circumvent Motorcycle Club protocols by establishing so-called one-piece patch clubs under the title of "blah-blah-blah-MC". The USMVMC prides itself in observing all MC protocols and extends respect to existing MCs by respecting the accepted conventions and practices in the areas in which we ride. We do not sanction or approve/disapprove the establishment of any type of organization but we do adhere to the standards of the MC community in any area we desire to operate. Our neutrality and non-territorial nature is above question and we operate as an independent, non-affiliated club at all times. It is our view that organizations attempting to "fly under the radar" by organizing under a one-piece patch while calling themselves a MC do a disservice to the community and their members by showing disrespect to the MC community in general. Either you are or you're not. Part of being a MC is following the protocols that extend and receive the respect that three-piece patch clubs mutually accord one another.

Within the confines of a given MC a common thread is Loyalty. Before a probationary member (probate) is awarded his colors, he must demonstrate his loyalty to those who will become his brothers. The strength of the MC is the bond among men who are all looking to help his brothers. Before a patch member can in all good conscience raise a hand in favor of awarding a full patch to a probate he has to ask himself whether he believes the probate is truly living up to the standards expected. Will he constantly look for ways to help his brothers and his club or is he in it for himself? It can be difficult to do but each patch holder must be able to say, "Nope, he hasn't got it just yet", and withhold his vote. Probation is just that. It is not initiation. It is not a rite conferred by some dark, secret ceremony. It's not beer bongs and toga parties and silly, demeaning stunts like a college fraternity. It is a period of time, however long, that gives the probate time to learn "what it takes". It is a period of learning, paying attention, and education. It is time where the habit of participating, trusting your potential future brothers (often blindly), maintaining a good attitude, and getting acquainted with the men with which he will one day become brothers. The list goes on. Motorcyclists by nature are individualistic and hardheaded. Much like learning to be a soldier in the Army the individual must learn why he should strive to be part of the institution and what forms that effort should take.

Once the Patch is awarded life does not get easier. There is no coasting. Each member is expected to pull more than his weight. As a member reaches higher levels of experience his brothers look to him to provide leadership. There are decisions to be made, other clubs to relate to, causes to be fought and won. There are brothers to be taken care of, charities to be funded, and families to be kept safe. There is always commitment to the club. There is always the expectation that the individual will conduct himself in a manner that projects a positive image to the Motorcycle Club community and the public.

The USMVMC is a true three-piece patch Motorcycle Club. We are an association of veterans, a club of bikers, a band of brothers. We are recognized and respected by other MCs both locally and nationally. We support one another and recognize that each member has family and professional obligations. We expect that our members meet those priorities in a mature and responsible manner. We have two common bonds. First, we are motorcyclists. Second, we have honorably served this nation and stood in harm's way to defend her. We are not solely a veteran's organization, such as the VFW (though many of us are life members). We come to the plate understanding such things as loyalty, duty, and sacrifice. We learned these things in uniform. Here we find a place to consistently encounter those things we value most when on Active Duty- respect, camaraderie, unity, and brotherhood.